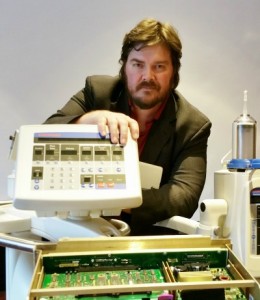 Originally trained as a BMET with the United States Air Force, Steve Maull served overseas before becoming a BMET instructor for the military in 1997. After leaving the Air Force 4 years later, Maull went on to found his own biomedical service training company based in Aurora, Ohio. Maull Biomedical Training, LLC specializes in contrast injector service training and provides students with hands-on courses focusing on operation techniques, preventive maintenance, and calibration and verification procedures. Maull spoke with 24×7 about his unlikely path to the biomedical profession, freeing your department from needless service contracts, and the pros and cons of certification.

Maull: I went to Miami University and got my bachelor’s degree in finance because I wanted to be a stockbroker. After about 4 months of doing that I realized I hated it! So in 1991 I joined the Air Force with my eye on becoming an officer and a pilot. When I joined I didn’t specify which job I wanted, since I figured I wouldn’t be doing it very long—maybe a couple years at the most before I went off to Officer Training School.

During the last week of basic training they marched us across the base to attend meetings and tell us what our careers were going to be. The other 49 members of my flight had all enlisted with predetermined jobs. Apparently I was the only one who had not. When they handed me my folder, it said I was going to be a biomedical equipment technician (BMET). I had never heard of it. The description said those chosen for this career field had strong backgrounds in electronics, hydraulics, pneumatics, and troubleshooting—none of which were true in my case. I didn’t know the difference between a transistor and a transmission, and the only experience I had with anything hydraulic-related was washing my car with a garden hose. So I was dumbfounded to have been selected.

I also had a girlfriend back home in Cincinnati I was keen on getting back to as quickly as possible. As soon as I got to my permanent duty station I thought we might be able to start getting serious about our relationship, so I wanted a tech school that was as short as possible. According to the folder, my training was 43 weeks . . . in Texas. I almost started crying. About 6 months later she dumped me and married a pizza delivery driver. Needless to say I never made it to flight school either, but things worked out pretty well anyway.

24×7: Why did you decide to become a BMET instructor instead of remaining a biomed?

Maull: In 1996 I was stationed at MacDill Air Force Base and I attended Airman Leadership School (ALS). While I was there, a couple of the ALS instructors thought I had the right personality and demeanor to be a good instructor and asked if I would be interested in becoming an ALS instructor. I really did enjoy being a BMET, but the idea of becoming an instructor intrigued me. So I talked to my career field manager to ask permission to change careers in the military and he said, “Well, if you’re interested in becoming an instructor, why not become a BMET instructor?” So I did. While being a BMET, you get to know a lot about a lot, but you can’t ever really become an absolute expert on any one modality since you are responsible for basically all modalities. As a BMET instructor, I would have the opportunity to become a subject matter expert in one particular area (at the time it was clinical laboratory equipment; now it’s contrast injectors). I am also very much a people person; I have an outgoing, Type A personality. These personality traits, I feel—while not required to be an effective communicator—do lend themselves to being a good instructor.

Maull: All we do is teach contrast injectors: operation, preventive maintenance, calibration, calibration verification, and repair. We don’t do service, parts, test equipment, etc. We have a company we partner with [Injector Support and Service] that provides all those things, but I didn’t want to get into any of that. I wanted to concentrate my company’s efforts 100% on training. I felt if Maull Biomedical offered service and parts, then it would start getting into a conflict of interest that wasn’t in my students’ best interest.

24×7: Do you compete directly with manufacturers? If so, what advantages do you offer?

24×7: How have shrinking HTM budgets affected attendance at your classes?

Maull: It has actually benefited our company greatly in the sense that, now that hospitals have to tighten their belts even more, they are looking for ways to cut costs everywhere. This mindset has been going on since 2008 when the economy went south, but it has only gotten more prevalent in the last year or so. One of the first, and best, places to cut costs is service contracts—to be more specific, needless service contracts. We train the biomeds so they don’t have to pay ridiculous prices on service contracts for a simple piece of medical equipment. The contrast injectors are just pumps: a motor turns a gear that drives a piston forward that makes fluid squirt out a syringe. It’s really that simple. Any BMET department that has these items under long-term service contracts really needs to reassess its role in the healthcare facility. Unless the department is severely undermanned, nobody should be paying $3,000 or more per year for a service contract on a pump!

24×7: What level of expertise do you see in your students today? How has that shifted since you began teaching?

Maull: The biggest change I see in students since I began training BMETs in 1997 is their computer and network skills. Their general equipment knowledge and troubleshooting skills have always been pretty good, but in the last 10 years or so I have seen a huge jump in the general BMET’s knowledge of networks and network components and how they are integrated into the hospital. Even your general biomed now has to have a working knowledge and understanding of the hospital information system (HIS)/radiology information system (RIS) infrastructure. Before that, only your imaging technicians really needed, or had, much knowledge of the hospital’s computer networks because the imaging department was the first to get integrated into the hospital network—so much so, they even got their own dedicated network, the RIS. Now, a great deal of the general medical equipment is connected to the hospital network so pretty much every BMET needs to be a bit network savvy, and the industry is doing a very good job of making that happen.

24×7: How would you assess the current state of biomedical education? Do you feel certification is necessary?

Maull: The BMET industry has actually had a bit of a rebound over the last decade when it comes to training opportunities. Our industry’s biggest problem was that the general public, primarily high school- and college-aged kids, were not really even aware the industry existed, or at least never gave it any thought as a real career opportunity. Unless they already know someone who is a BMET, it doesn’t really dawn on them that it is even a job. But the “BMET presence” has greatly increased online over the last decade with publications like 24×7, as well as many state biomed associations and other organizations such as AAMI. There have also been several online articles from very prominent, non-industry specific publications such as Time Magazine recently ranking us as one of the “5 Best Jobs You’ve Never Heard Of.” From a public awareness perspective, our industry is making strides.

What this has done is driven up demand for training in our industry. Twenty years ago, very few colleges were offering an associate’s degree in biomedical equipment technology; now it is easy to find a college or technical school that offers such training pretty much everywhere across the United States. But, to be honest, getting that associate’s degree (or completing your BMET training in the military) is just the start of your education. Getting that piece of paper gets you the job; your education and training doesn’t stop once you’ve been issued a toolbox and a workbench. A great deal of your continuing education and training comes in the form of on-the-job training and via your fellow BMETs in your shop. I feel our industry does a very good job bringing along new BMETs and spreading the common knowledge.

As for certification . . . do I feel it is necessary, or should it be required? No! Absolutely not. There are many fine BMETs out there who are outstanding at what they do and don’t have a certification after their name. However, getting certified does show you are willing to put in the extra time and effort to show you are upwardly mobile in this career field. The exam is not at all easy, and anyone who has passed it has put in time, effort (and sometimes money) to do so. This shows they are dedicated to their craft, and are willing to go the extra mile, traits companies are looking for in their managers and directors. It is rare to find a BMET manager without CBET, CRES, CCE, or something along those lines after their name. This is not to say those who don’t get certified are not these things, but they will find it more difficult to land those managerial jobs without that CBET or CRES acronym. It kind of speaks for itself.